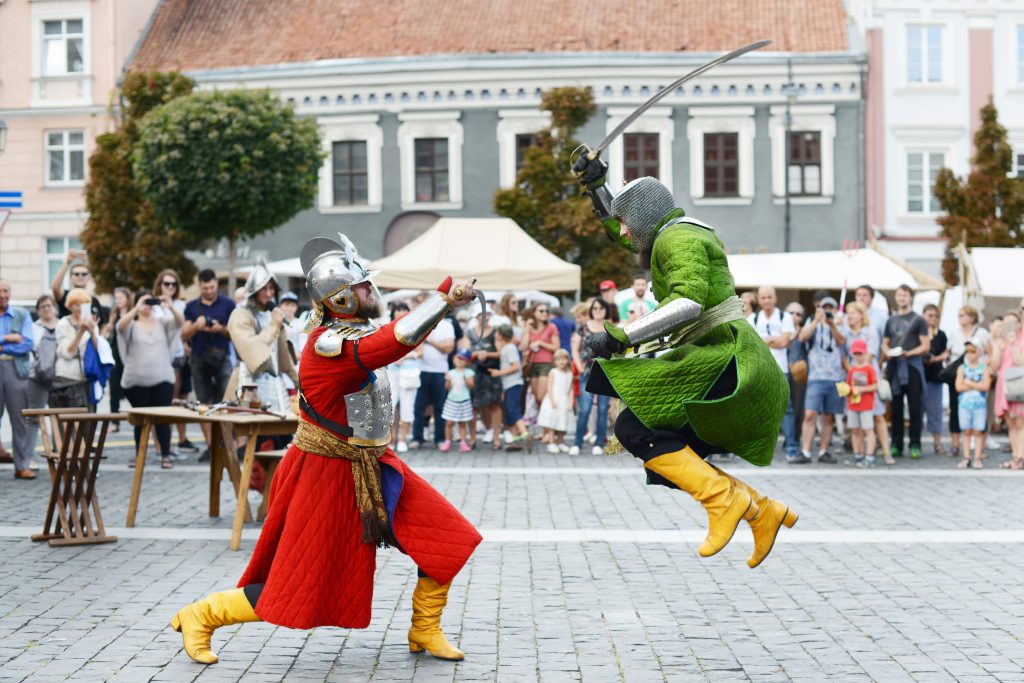 Traditional St. Bartholomew’s Fair certificated as Lithuanian national heritage is revived for the 8th time with a great event reconstructing crafts, arts and guild traditions of the Late Medieval Ages and the Renaissance. The Fair will be held at Vilnius Town Hall square on the 23rd–24th of August, 2018. The Fair has been known for the citizens of Vilnius since 17th century after being mentioned for the first time in 1664 in the first Statute of Vilnius potter’s guild.

St. Bartholomew’s Fair lasts for 2 days. It opens with a solemn parade with the flags of the Vilnius craftsmen guilds (The Gates of Dawn, Vokiečių str., Dominikonų str., Šv. Jono str., Pilies str., Didžioji str., Town Hall Square). During this event citizens and guests of Vilnius get the exceptional chance to get acquainted with crafts, see the warfare and noblemen’s fights of 17th century, see demonstration of production processes, be in craftsmen’ shoes by throwing, spinning, weaving, forging coins, admire costumes, dance and listen to the music of the Late Middle Ages and the Renaissance, listen to the lectures about food, executioners and history of crafts, and purchase items reconstructed by professional craftsmen according to the originals of 15th–17th century.

This year Fair‘s program is not only full of music, circus, dance and warfare performances, but also everyone will get a chance to know each craft better and closer – more than 70 craftsmen-reconstructors will demonstrate crafts and teach visitors various ancient secrets:    from making a wooden pipe or kneading-trough for bread, or decorating rings of the Grand Dukes of the Grand Duchy of Lithuania, to archaic craft of stained glass. For those who want to learn more – National Museum of Lithuania will invite visitors of St. Bartholomew’s Fair to special tours. Visitors will have a free entrance to a chosen tour after collecting stamps from craftsmen on a special card which will become their ticket.

Organizers of this Fair invite all citizens and guests of Vilnius city to commemorate this unique festival of city’s craftsmen in the context of celebrating 25 years since Vilnius was listed as a UNESCO World Heritage Site and 355 years anniversary when the Fair was mentioned for the first time in 1664 in the first Statute of Vilnius potter’s guild. Historic St. Bartholomew’s Fair is certificated as Lithuanian national heritage and maintains traditions of crafts and city’s culture. This revived festival is valuable as the part of Intangible Cultural Heritage for strengthening the cultural contents and significance of Vilnius Historic Center – UNESCO World Heritage Site.

The main organizer: The Fine Crafts Association of Vilnius

This website uses cookies to improve your experience while you navigate through the website. Out of these, the cookies that are categorized as necessary are stored on your browser as they are essential for the working of basic functionalities of the website. We also use third-party cookies that help us analyze and understand how you use this website. These cookies will be stored in your browser only with your consent. You also have the option to opt-out of these cookies. But opting out of some of these cookies may affect your browsing experience.
Necessary Always Enabled
Necessary cookies are absolutely essential for the website to function properly. This category only includes cookies that ensures basic functionalities and security features of the website. These cookies do not store any personal information.
Non-necessary
Any cookies that may not be particularly necessary for the website to function and is used specifically to collect user personal data via analytics, ads, other embedded contents are termed as non-necessary cookies. It is mandatory to procure user consent prior to running these cookies on your website.
SAVE & ACCEPT